Here’s an easyish offering from Sam Ezersky. Solve the puzzle here — read on below. 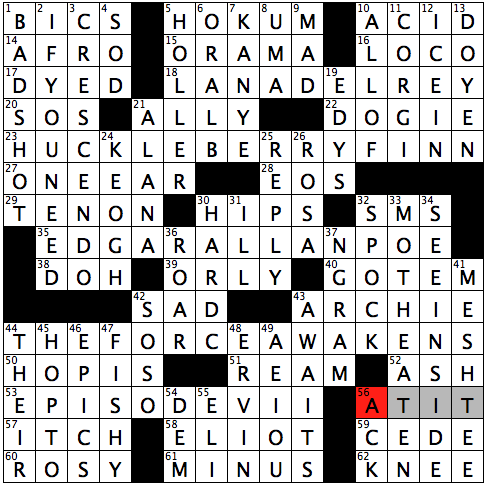 Timely puzzle, as I’m currently beating my head against a Gaffney meta that shares a title with this movie. Don’t think I’m going to solve it, though I still have another day or so to put it together.

This is a solid, straightforward theme. Sam’s gone with the most famous examples of POE, FINN and REY that I can think of, as well he should. Shame there isn’t a famous name that ends in REN to provide another theme answer, so that the anticlimactic post-reveal EPISODE VII wouldn’t be needed for symmetry, but I think it works nonetheless.

It’s also a fairly dense theme, with two grid-spanners included here, so I’m impressed by the wide-open NW and SE corners, with SEE INSIDE (34D: Promotional words linking to an eBook’s preview) as the highlight. The whole grid is pretty open, in fact — the only pace it’s cramped is around the middle, but I think HUCKLEBERRY FINN will be an easy answer for most people, which neatly sidesteps the problem.

My favourite fresh clues are 30A: Shakira’s don’t lie (HIPS), 56A: Going hard on the grind (AT IT), 1D: Airball, e.g. (BAD SHOT) and 7D: Rapper whom Obama called a jackass, casually (KANYE). I also have to give a shoutout to THEIR being clued as 44D: Pronoun often misspelled in social media comments — one of my pet peeves, for sure.

There’s a great clue pairing in 9D: 😡 and 42A: 😦 spicing up MAD and SAD. Not sure I love ORLY being clued as 39A: “R u forrealz?!” — fresher than the French airport, certainly, but it still seems like crosswordese to me. Never heard of KEOGH IRA’s, ALANA Stewart, ARCHIE Manning, a DOYEN or Google NGRAM Viewer, but the crosses were all reasonable. I also have to admit I don’t understand the clue (49D: Half-serious quintet?) for AEIOU.