If you like themeless puzzles, you’re probably already solving these. But just in case, sign up — KAC’s next puzzle drops Monday. Then read on for HIGH: low #7. 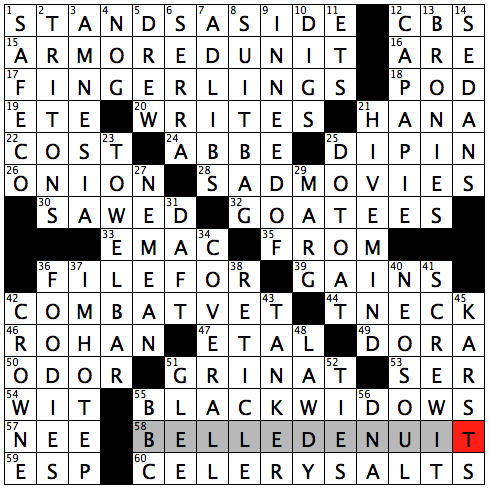 Now that I’m getting good at solving hard themeless puzzles, I’ve been thinking more and more about how different puzzles create difficulty. I know this is old news to constructors, but it’s interesting to think about the different categories. I’m going to list a few of them, with examples from this (very good) puzzle as illustration.

The crossword writer’s bread and butter. This is a popular choice for increasing difficulty because of the “aha!” moment, though interestingly if it’s used relentlessly I become frustrated. That can be an issue with Fireball puzzles, where you see a lot of this. Note that these examples (along with others I didn’t flag) are all spread out nicely, so that nobody gets frustrated.

Usually clued definitionally, so as not to distract from how cool the words are. Sometimes referred to as “freshness” or “sizzle”. This is my personal favourite kind of difficulty in crosswords, and a big part of the reason why I enjoy late-week NYT and AV Club crosswords so much. (Seeing these entries in AV Club so often is especially impressive, since most of those puzzles are themed, making it hard to build this stuff in.)

KAC’s puzzles always have a lot of this. I particularly like it when constructors position the entries to build off each other, as here with BLACK WIDOWS and BELLE DE NUIT.

This is one that I suspect more experienced solvers don’t really register, because they’ve seen the tricks so often, but I definitely do run into clues that I can’t even parse at first. All of the above are in this category for me, though obviously your mileage may vary. Victor Barocas, who’s currently running the excellent Ada Cross stories/meta puzzles (I’ll probably write something up after the first story concludes in a couple weeks) is very good at this.

Often used to spice up 3- and 4-letter fill too, although there aren’t any good examples here because it’s a low-wordcount puzzle. A little of this goes a long way for me, because you either know it (the first two for me) or you don’t (the last two… in particular, I needed every cross for KARSTS). If you share similar interests with the constructor, this can be very satisfying. If not, it can be off-putting. For example, I like Matt Gaffney’s metas a lot, but man that guy likes his chess.

This is one of those tricks that is impressive in small doses… too many, and I sour quickly on a puzzle. As Lena has noted, Tim Croce often uses this trick in his Club 72 puzzles.

Or Scrabble-fucking, as it’s been called. Impressive as long as it’s done smoothly. There isn’t really any in this puzzle, but it occasionally shows up in certain constructors’ work. I tend to notice it most in the NYT.

I’m sure there are others, but these are the ones that stand out to me.

Finding the right balance of all these different approaches in a single puzzle is what turns a good puzzle into a great one. I think that balance is also what people are talking about when they discuss constructor voice, which is probably why different people can have such different opinions of individual constructors. I really like the voices of Kameron, Patrick Berry, Byron Walden, Pablo Pasco, and Aimee Lucido, among others, while some constructors don’t quite click with me.