Welcome to another Club 72 double-header review by The Cheater Squares, Lena and Peter. Tim has hit the century mark in his outstanding series which he started when, like, October? Dude cranks out puzzles at an astonishing rate. Like, I barely get enough time to solve each one for the purposes of reviewing before the next one comes out (TONIGHT). Solve them here and here 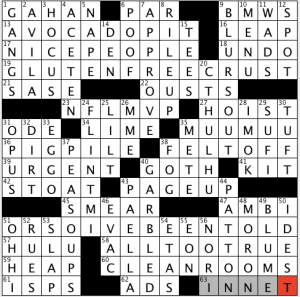 Peter: Generally I prefer mid-range to grid-spanning entries, for whatever reason, but GLUTEN-FREE CRUST is just solid gold. OR SO I’VE BEEN TOLD (51A: “…well, that’s the rumor, anyway”) was easy but a lot of fun to suss out; I had OR SO off the crosses, and I considered about 5 different answers before hitting on the correct one. OR SO THE STORY GOES, OR SO THEY SAY, OR SO IT MAY SEEM, etc.

Lena: As answers go, I agree that GLUTEN-FREE CRUST is wonderful… BUT I side-eyed the clue [Healthy pie option] because it’s only “healthy” for folks with legit gluten intolerance; there is nothing inherently unhealthy about gluten, and I pretty much loathe gluten-free as a diet trend.

Peter: There is much I do not know about gluten, but I won’t argue with this. It confirms all of my curmudgeonly suspicions about diet fads, so I like it.

Peter: In what games is the clue for 4D (You can’t beat this deal: ACE TEN) true? I was thinking hold ‘em poker at first so I stumbled on this, but I guess it makes sense if you’re talking blackjack? Are you a gambler?

Lena: I mean, I get out of bed every morning and whether or not that ends up being a good idea is a total gamble, right? Nah, my card game knowledge is right down there with my sporps. I can identify misdirecting card game clues pretty well, and know that if it’s not just ANTE there will be some numbers and probably ACE. Speapsing of sporps, there was a bunch of golf stuff in here! PAR (6A: Hole mark), TEES (15D: They usually get stuck before driving), and… well, I guess that’s it. And I guess they were, like, “beginner level” golf things.

Peter: I actually had TEE for PAR at 6A at first because my sporps alarm went off and I was all like “Golf! 3 letters!” TEEEEEEEEE!”. HOCUS (3D: Pull a trick on) is my dafuq entry for the day. LIME (34A: Light material?) gave me shits too but that’s all on me since I had LAMÉ until literally the very last letter. I had basically just accepted that LALT was a thing and moved on until I remembered that one of my very favourite Rush songs (it’s a deep well) is “Limelight” and that has lime and light in it so ooooooohhhhh.

Lena: Don’t HOCUS me, bro! HOCUS and pocus are nouns to me; units of magical shenanigans. LIME blew my mind, somewhat because I didn’t have MME (26D: Title for many a psychic: Abbr.)– to me that’s just a French abbreve and I guess I never thought about what psychics titles are! So much HOCUS. Anyway, I still misinterpreted “light” as “not heavy”– like talc on Mohs scale. LIME is light in that sense too, but dat question mark tho.

Peter: That clue for ODE (31A: Lines of credit?) is stupid good. How has that never been used before? That clue for NOR I (56D: Mutually exclusive comment?) tickled the undergrad computer science student in me (he’s still in there somewhere).

Lena: My inner mopey 80’s music fan is angry with me for not fully remembering [Singer Dave of Depeche Mode]’s last name, GAHAN (1A) despite the fact that just last month my work friends and I decided which mopey 80’s singers we are, and I obviously said “I’m Morrissey” but one of them was like “NO, Amanda is Morrissey! You’re David G_H_N!” Whatever, Morrissey wouldn’t care (and Amanda said I can be Morrissey anyway).

Peter: Big fan of the ]’s above. I’m a sucker for the insane and surprising Crocean fill and TC delivers here with FELT OFF, FLINT, MI, PIG PILE, and NFL MVP. I automatically love every vowelless yet valid entry over 5 letters. I loved so much fill in this puzzle, though: AVOCADO PIT, NICE PEOPLE, ALL TOO TRUE, CTHULHU, and BLURS OUT deserve honourable mentions.

Lena: “Honourable” looks so much more… honorable. I knew you would get all kinds of wet over NFL MVP; Croce’s got your number alright. I love how weird NICE PEOPLE is– clued so innocently and straightforwardly [They’re pleasant to deal with]– it just cracks me up. 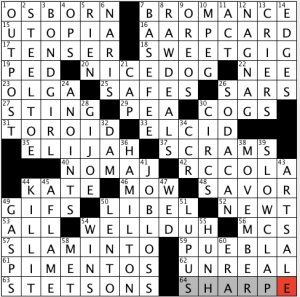 Peter: In addition to vowelless-yet-valid entries over 5 letters, I also automatically love every two-word entry where the first is an initialism. See AARP CARD (16A: Old benefit provider). Wait, nevermind, I take it back. Cause that would mean that I love RC COLA. I mean, it’s not terrible fill, but it’s crosswordesey and since I have precisely zero irl experience with this it will always be a recognizable-because-crosswords yet nonetheless meaningless string of letters, fresh clue or no. Actually, not 100% meaningless; I always imagine a remote-controlled SODA CAN (26D) when I see that name.

Lena: I have exactly the same amount of irl experience with AARP CARDS and RC COLA. I think you should love anything that makes you think of a remote-controlled SODA CAN!

Peter: I knew SHARPE (64A: Indie folk band Edward _____ and the Magnetic Zeros) cold because one of my old bands used to cover that “Home” song. Remember that one? The feel-good hit of the summer of, what, 2011? What if this were clued as, like, [Slightly out of tune note below an F]? Things like SHARP E and FLAT E are not entirely out-of-the-language, vis-a-vis musician-speak.

Lena: Oh man “Home” is that hipster wedding tune, huh. Etsy bridesmaids dresses, toasting with the groom’s brother’s homebrew in mason jars.  It’s got that rustic “HEY!” in there so that we all feel like we are stompin around in a barn, snappin suspenders… Please tell me your band did a metal cover.

Peter: You have a gift for saying what we’re all thinking. And by we I mean me. No, unfortunately I was in a non-ironic indie rock band, complete with like 8 superfluous members on stage. I did get to play the trumpet part though! Speaking of things that almost sound like they could be musical terms: NO-MAJ (40A The American word for “muggle,” according to J.K. Rowling)? I didn’t get this at first. Like, I was wondering if it was a similar situation as the “Philosopher’s Stone”/”Sorcerer’s Stone” thing, wherein yanks get a slightly different version than the rest of the world. But no, it seems that this is just a term from J.K. Rowling’s extended HP universe that is never actually used in the books. Like, Americans in the book universe would say no-maj rather than muggle. I kind of love that.

Lena: It’s too meta! Too much HOCUS! Don’t get me wrong– “Harry Potter” gets kids these days (ktd = smh) to read, so I have to like it, AND I love potions and wizardry and all that, but I just really hated JK’s MAJ-world lexicon. Everything sounds like an 90’s toy with some Latin mixed in. HP is the Scrabble Jr. version of “The Golden Compas”s trilogy’s Biggie Scrabbz. I think NO-MAJ is a legit entry here, but JK should have had her imagination hat on. Oh and if you want some MAJor laughs, check out Lifetime’s “Magic Beyond Words: The J.K. Rowling Story.”

Peter: So NO-MAJ is weird but kinda righteous too. It’s either the best or the worst thing in this puzzle. But, as usual, there’s so much unquestionably great shit here, like SWEET GIG, AARP CARD, NICE DOG, NAG NAG, …actually, most of the very croce-est stuff is in the NE. The rest, while great, is a bit more reined in than his typical offerings. Like, stuff like MOVEMBER, SLOW CLAP, WELL DUH, BOND GIRL, etc. still screams indie freestyle, but, like, a normal indie freestyle. I guess I hold TC to a certain standard of outlandishness. Anyway, both great puzzles, these. Here’s to 100 more; thanks Tim!