Solve this week’s puzzle here, then read on. Snap to it! 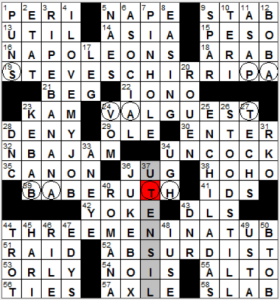 We’re back to puzzle 170 from 187, and back to a more straightforward theme instead of an intricate meta. The RUBBER BAND in the title and revealer refers to the old nursery rhyme:

Rub-a-dub-dub,
Three men in a tub,
And who do you think they were?
The butcher, the baker,
The candlestick-maker,
They all sailed out to sea,
‘Twas enough to make a man stare.

The THREE MEN IN A TUB are males whose names are flanked by types of large liquid-holding vessels. (The rhyme initially described three maids instead of men, but I digress.) We have The Sopranos actor STEVE SCHIRRIPA, English film director VAL GUEST, and baseball legend BABE RUTH. That’s basically it. Three men, three tubs. Two of the men I didn’t know (which is probably more my lack of TV and film watching), but that’s half the theme entries, so that detracted from my solving experience.

The revealer is a nice play on words, with RUBBER referring to the rub of “rub-a-dub-dub” as well as maybe the rubbing/scrubbing that occurs in the tub. Two of the tubs used are types that normally hold people, and one is more for dyes or aging liquors. This isn’t a deal-breaker for me, but it’s something I noticed. Not that I can think of another tub that usually holds people. Pool, maybe, but that’s different than a tub.

As for the fill, I wasn’t in love with prefixes PERI and IONO or partial IUSE, and I hadn’t heard of BTOB, 50d. [Like transactions between two companies, for short], but everything else was solid to great. Loved the shoutout to KAMeron Austin Collins, who has a free bimonthly themeless crossword subscription here, and who has offered to mentor women who want to get into constructing themelesses (see the note in Erik’s post linked above). He does amazing work, so anyone who’s been thinking about constructing would be lucky to have his guidance.

Anyway…what I loved most about this puzzle are the super short but super clever clues. Didn’t understand the need for the abbreviation in the clue for 14a. ASIA [In. continent] until I read it out loud. 56a. [Bow togs] (Botox) for TIES, 9d. [Practice your rights, say] for SPAR, 10d. [Polo, player] for TERI, 12d. [Tea balls?] for BOBA, and 25d. [Whole foods?] for ENCHILADAS stuck out as great.

It’s almost time to board a plane from Orlando back to Philly, so let’s finish with what I learned from this puzzle. I didn’t know about stand-up comic HARI Kondabolu until now. I also learned that his brother Ashok was a member of Das Racist. So…let’s end with the song that takes root in my brain every time I see a Pizza Hut or Taco Bell connected with any other fast food joint. You’re welcome.